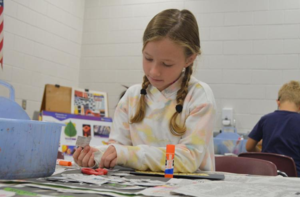 No class day is the same in Deborah Arnold’s art room at Oglethorpe Point Elementary.

Arnold teaches kindergarten through fifth-grade students at the island school, and she estimates that around 500 students pass through her classroom for weekly classes.

On a recent morning, a second-grade class learned about the Japanese artist Yayoi Kusama, who is known for her extensive use of polka dots.

“They’re finishing up their Kusama pumpkins,” Arnold said. “We’re studying the artist Kusama, and they’ve already done their patterns and then they’re going to take newspaper squares here and put them around for a pattern going around.”

Arnold’s class is one of many in Glynn County that receives copies of the Brunswick News twice a week. She’s able to put them to good use no matter the week’s lesson plan. Newspapers cover nearly every tabletop in the school’s art room, serving as both table cover and reading material during work pauses.

The project at hand recently was a cutting, gluing and coloring activity that helped the students practice their fine motor skills and explore warm and cool color palettes.

The students will also use newspapers to create collages, to practice their cutting skills and much more.

“The papers are wonderful because we lay them out on the table and when they’re finished they love to look at them,” Arnold said. “We’ll do some projects with collages, and they’ll look for words and letters and some pictures. But today we’re basically using them to incorporate it into our artwork.”

Arnold, who has taught at OPES for eight years, has been an educator for 25 years.

Art classes are an important break for students to escape the screens and engage their minds in a creative activity, she said.

“They love it,” Arnold said. “It’s good to switch from being on computers and looking at screens. They can think outside of the box and think through problems, how to fix a problem on their own, rather than a computer telling you.”

The COVID-19 pandemic closures had students staring at screens more than ever before, and Arnold said she’s noted a drop in motor skills development among some. Art classes offer an opportunity to practice those important skills.

“And they can just go with the flow,” she said. “If there’s mistakes, I’ve told them, happy mistakes (make) great art.”